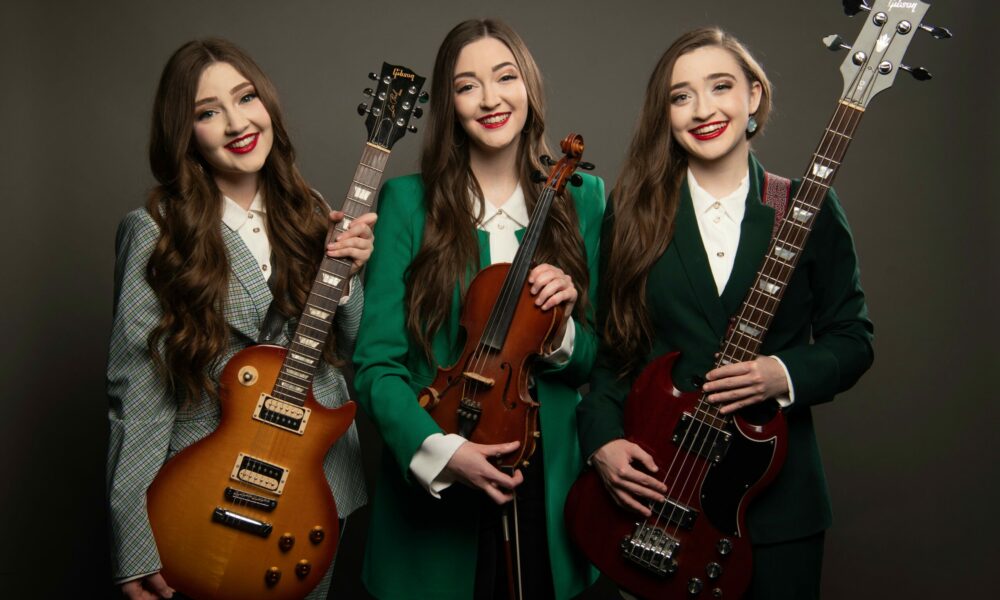 Hello K3 Sisters Band; please kick things off for us with an introduction to yourself and your story.
KAYLEN: We are happy to open this interview by discussing how we got started, which led us step by step to where we are today. So, today the K3 Sisters Band is fronted by us sisters Kaylen (23), Kelsey (21), and Kristen (18). We were all born into a musical family in Dallas, Texas. As a result, we began singing and studying fiddle when we were each four years old or less. As fourth-generation entertainers, we were at home on stages and venues as we performed beside our parents, extended family, and friends.

KELSEY: As kids, we were constantly performing for Texas fairs, festivals, churches, non-profit charitable fundraisers, nursing homes, and private functions. Looking back, we understand now that when we began kind of “stealing the show” with our fiddling and singing in three-part harmony as little girls during our show segments in our parents’ band, we began getting the idea of forming our own band someday. But we knew we couldn’t do it alone, so our parents agreed to support us entirely after our home-school studies with DVDs so we could travel and study between shows and rehearsals when necessary.

KRISTEN: On a plane ride home from Disney World in 2009, all of us began sketching band names and possible logos on scraps of paper that gave birth to the name K3 Sisters Band and our logo. We even have saved that original sketch from that plane ride for a K3 Sisters Band museum that we hope to open someday for interested fans.

Oh, by the way, we settled on the name K3 Sisters Band because all of our first names begin with the letter K. Also, we knew several other performers and many international companies use K3 in their names, but to this day, we are the one and only K3 Sisters Band!

KAYLEN: Yes, as Kelsey said, the development of our musical careers was propelled because we were homeschooled from kindergarten to high school graduation by our parents. Lucky for us, they are certified school teachers, musicians, and producers. They first met on stage, performing in Dallas! And guess what?

KELSEY: So, after several years of headlining the K3 Sisters Band across Texas with our parents and the help of several side men as backups, we agreed to begin performing weekly educational programs for dozens of public schools in Dallas County. The shows were written and produced by our parents. They had a heavy emphasis on singing and dancing as the medium for delivering many of the mandatory educational concepts required to be taught by teachers to elementary school students. So, the teachers loved the idea! It was following one of these concerts for several thousand screaming students and educators at a small coliseum that all three of us committed to go all out into making music and entertainment our careers.

KAYLEN: As a catalyst to this life-changing decision, we won $5,000.00 and first place for writing and performing an original song for a large festival competition in Dallas. Instead of spending the money on our equipment or recording expenses, we went on a Caribbean cruise with the whole band and blew all the prize money in a week! And all these years later, we still perform “The Party Never Ends” at many of our concerts.

KRISTEN: Like other struggling musicians in the early days of social media, we opened Facebook, Vine, Instagram, and Twitter accounts and began posting short and long-form videos of funny moments as well as covers of popular songs. And when Musically morphed into TikTok, I was the one who recommended adding TikTok to our diversified social media accounts. To our sheer amazement, our TikTok posts and videos soon began to go viral worldwide. Today we have 2.5 million TikTok followers. And over one billion views and likes in over 50 countries. Additionally, we are now verified on TikTok, Instagram, YouTube, and Facebook with Reels and Shorts that garner millions of views. Among other things, we are super popular with the Harry Potter Fandom and Potterheads internationally.

KELSEY: Okay, going back to how we got where we are today, in addition to studying vocals, songwriting, and recording, we began to expand our study of instruments with the encouragement of our dad, who is a multi-instrumentalist, and our mom who holds a music degree with a vocal emphasis.

KRISTEN: Yes. Our progression was from fiddle to guitar, mandolin, bass, drums, harmonica, and ukulele. The result is that today we have mastered these instruments to the point where during our live-stream concerts and studio recordings, we freely interchange between these instruments as we deliver our original songs.

KAYLEN: Oh, and I have to mention this, although we initially performed covers of songs, when a large musical company forced Twitter to cancel our large account for copyright infringement for posting a 15-second cover of a popular song by one of their top 40 artists, we decided to write, copyright and perform only our own music. To this day, we never do covers at our shows and only do a handful of songs that are clearly in the public domain.

KELSEY: Another super important reason to get to where we are today is that we decided to be a do-it-yourself organization. We have refused to sign contracts with major music labels, and TV talent shows after reading the highly restrictive legal language contained in the contracts. Of course, we get help with this from our dad and attorneys. So, we continue to operate as a direct-to-fan band and family-run entertainment conglomerate, down to totally controlling our own Bruce Ray Productions recording label registered with BMI.

We all face challenges, but looking back, would you describe it as a relatively smooth road?
KRISTEN: In a word, No! We have faced several struggles common to anyone in the entertainment or music business. One of the struggles is how to deal with online cyberbullying. We have had situations where we read comments on posts, or even right in the middle of a concert, we are live streaming, where we see and read ugly comments coming across our monitors. When we were younger, it was terrifying and discouraging. But those feelings were countered by us writing some anti-bullying songs and creating our #K3Motto.

KELSEY: Yes, our K3Motto is: “I will always believe in myself and celebrate my life and the lives of others. I will respect the music and customs of others as long as they are not harmful to anyone. I will stand against bullying and choose love over hate.” Over the years, we recite this to ourselves and have shared it with countless thousands of fans and friends of all ages and persuasions. And persuasions who have overcome the fear and shame of being bullied to some extent because of our motto.

But another struggle we have had to face is the isolation of working long hours over the years on our music when other kids our age were going to school events, sports or trips. The truth is that many performers are lonely at times, even though you would never think so. Also, when sound problems happen during a concert, it is upsetting.

KAYLEN: How would you like to come off a stage after singing and performing for thousands of people whose faces were radiant with joy and singing along, only to have a promoter tell you, “You’re not very good singers.” Believe me; it hits you wrong. And it happens. Also, the sound men doing sound checks before shows can be very rude and challenging. That kind of treatment is difficult to overcome right before a presentation. You have to be in a positive frame of mind to go on stage, or things go wrong. And when we were young, just starting, media reps and music industry people called us the singing chipmunks because our voices were not yet mature. That hurt us more than you would think it should.

Thanks – so, what else should our readers know about your work and what you’re currently focused on?
KAYLEN: Because we write all our songs and lyrics, we find ourselves relating to current emotional situations, world events, or movies and then using that pathos to inform our creative juices. Many of our songs are born from real experiences and people, but you will never know the details. We never want to influence the listener, who should be free to determine their relationship and context to our songs. We strive for that.

KELSEY: I am proud of the fact that I am the lead tech for the band. I am skilled at editing our videos, working with the soundboards, and amplification needs. Only a few bands can run their sound and live streams right from their performing stage, but we do. It has its limitations but also has an excellent freedom element. Not having to deal with cocky sound engineers is very lovely at times.

KRISTEN: Well, in addition to our music, lately, we have revived the creation of our Superstar Central show for our fans. For example, we recently visited Elvis Presley’s Graceland in Memphis, TN, and Sun Studios, where he and other greats recorded. We produced a YouTube episode on the experience when we got home to Dallas. And after we did a live premiere of it, we continued to interact with the viewers who commented on their appreciation and love for Elvis and their ideas about the recent Elvis movie with Austin Butler as Elvis. Also, we have gotten to work with Warner Brothers to help promote films like the Elvis film, Suicide Squad, Fantastic Beasts, and others by attending premieres and giving away tickets and movie merch to our fans. Very cool!

What changes are you expecting over the next 5-10 years?
KRISTEN: This post-pandemic period is perfect for operations like ours that have created a large online fan base. Kids are buying music differently than they used to. Our TikTok and YouTube reach is growing at very high rates. We want to keep that acceleration going to monetize further our original work on social media instead of relying on music sales.

KELSLEY: Yes, we continue to give away all our music for free, but you have to go to our website to stream or listen to it. We’ve recorded 13 albums, and our latest one on our website is “13,” which commemorates our 13th year of performing with 13 original songs. So, we don’t support Apple Music or Spotify, which rip off artists like us. They don’t need us, and we don’t need them. In 5 years, we plan to have a sponsored TV show.

KAYLEN: We ask ourselves all the time about the future and make plans. But, the truth is you must react to current situations without knowing what will develop. Things are moving fast. Look at how Meta stock has crashed lately because Mark Zuckerberg thought the “metaverse” would happen immediately. It has yet to, and he’s spent and maybe lost billions of dollars. So yes, timing is everything, and you never know for sure until it is the right time. There is luck or fate involved in many people’s success stories. 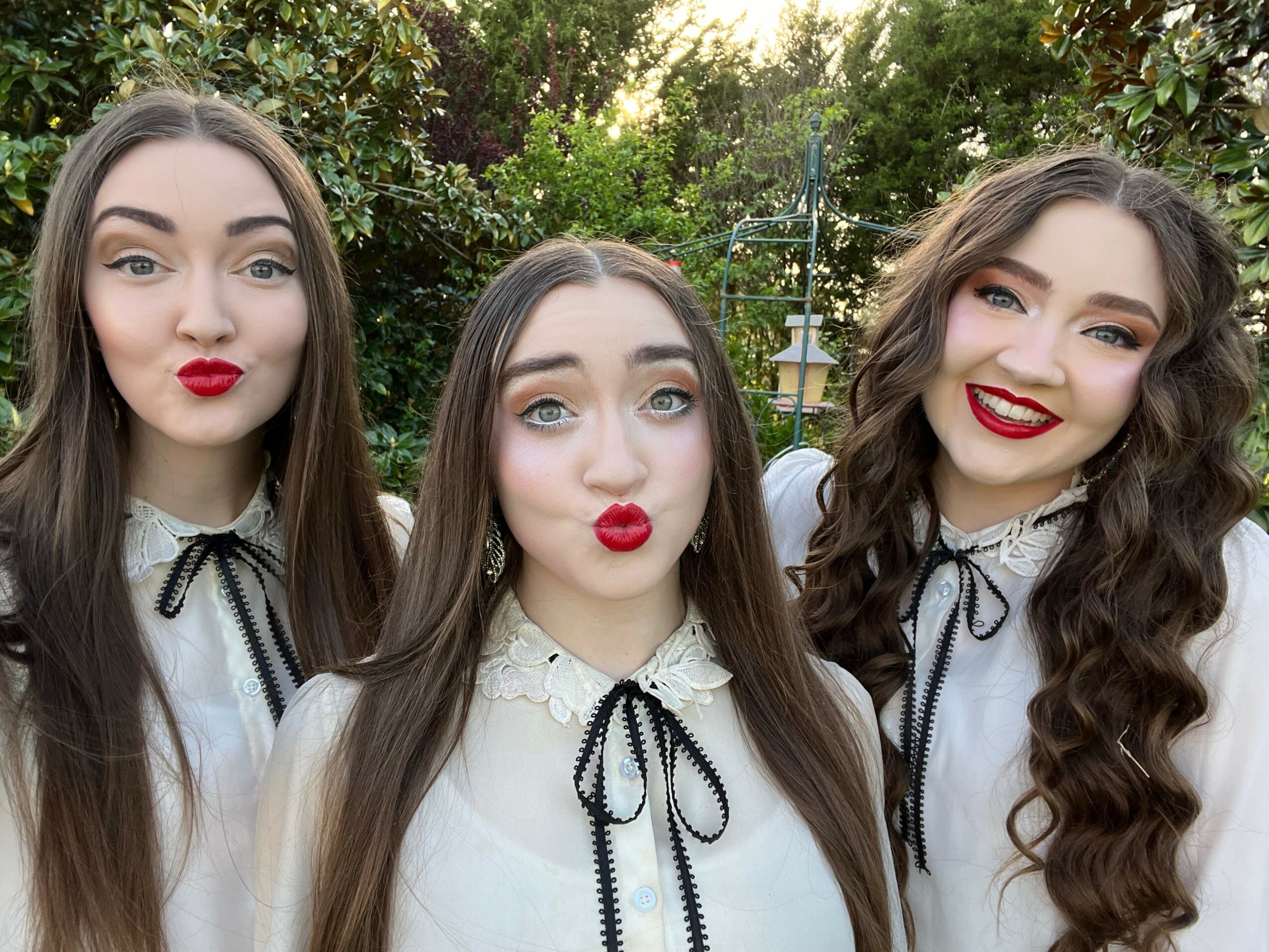 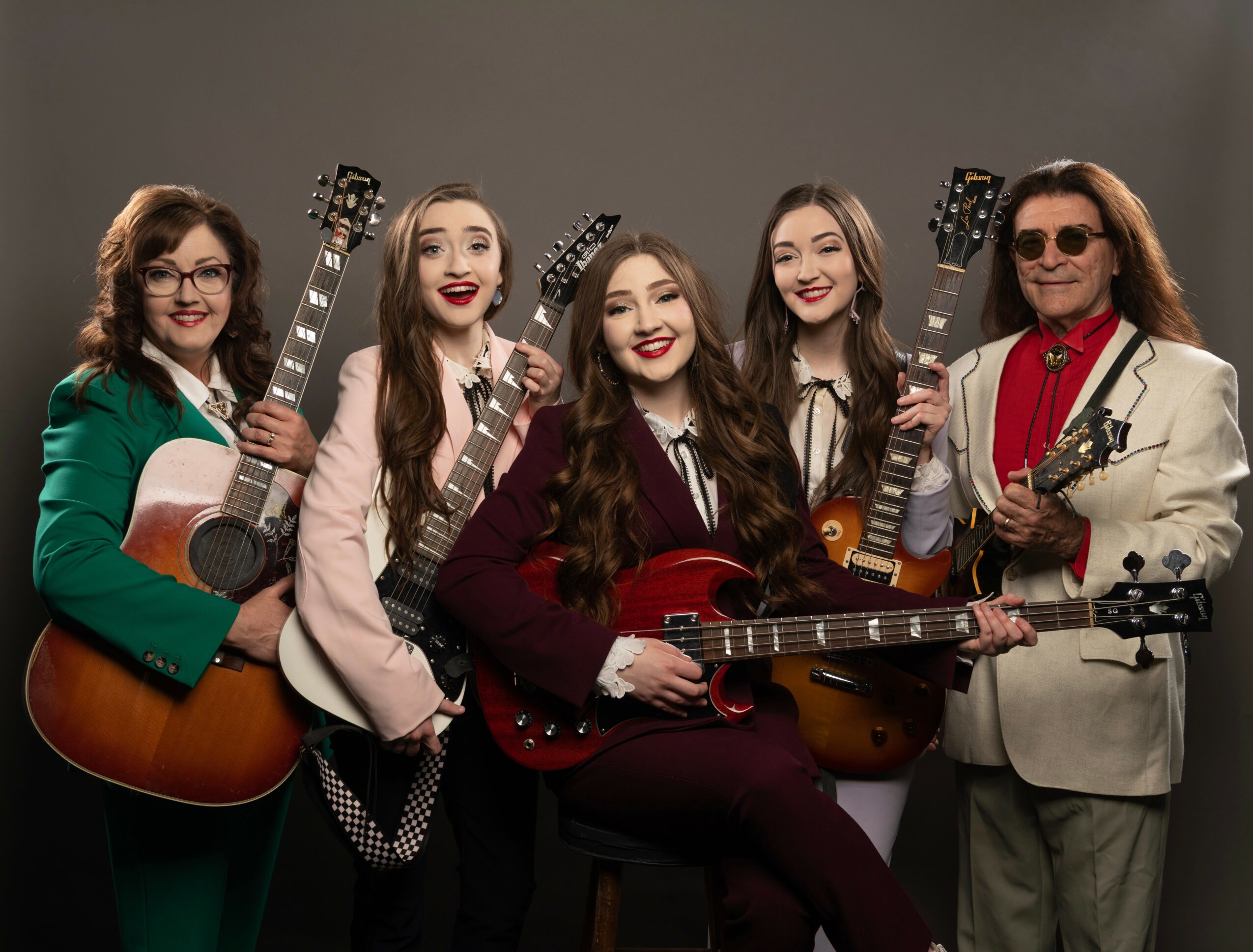 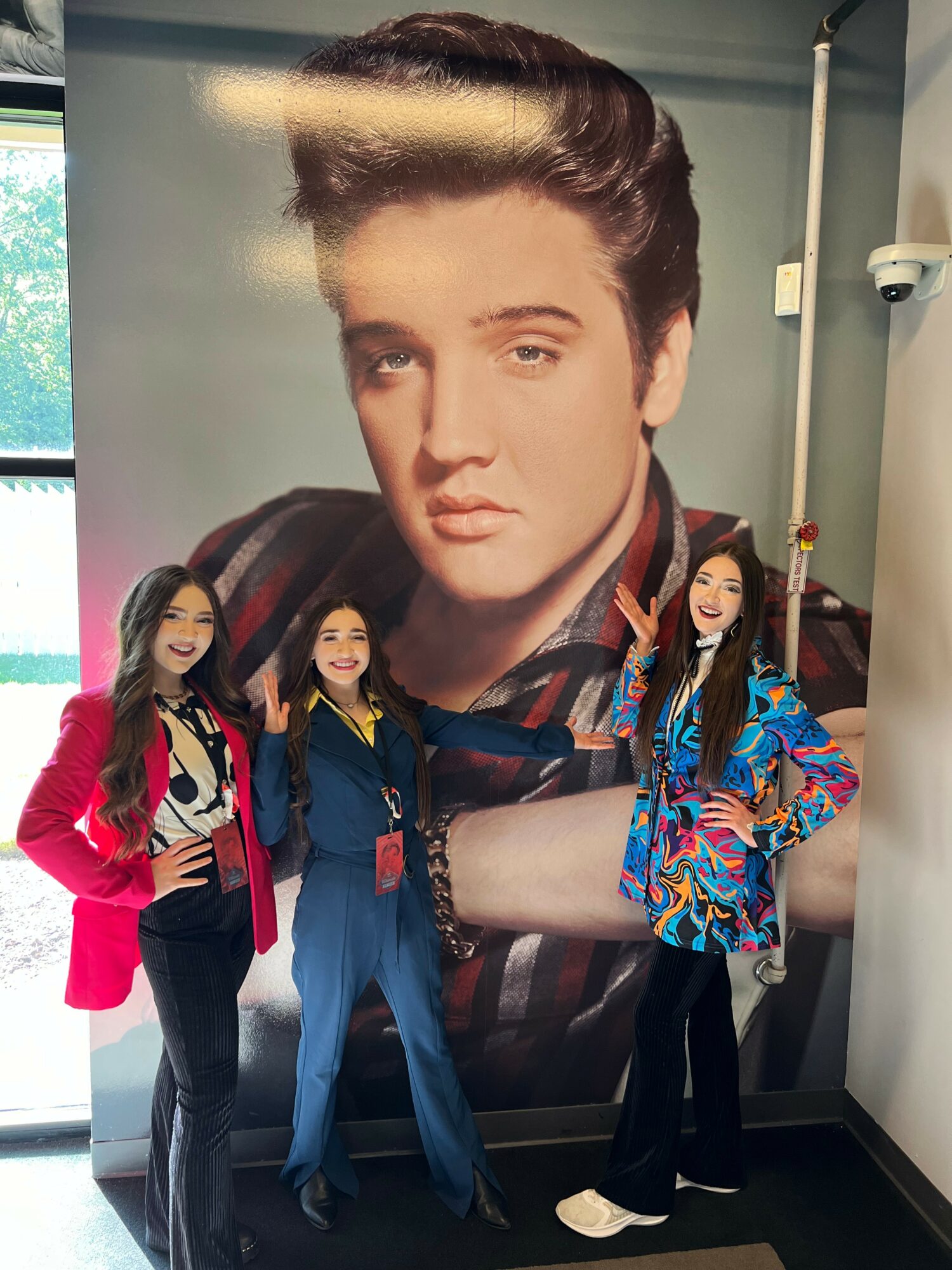